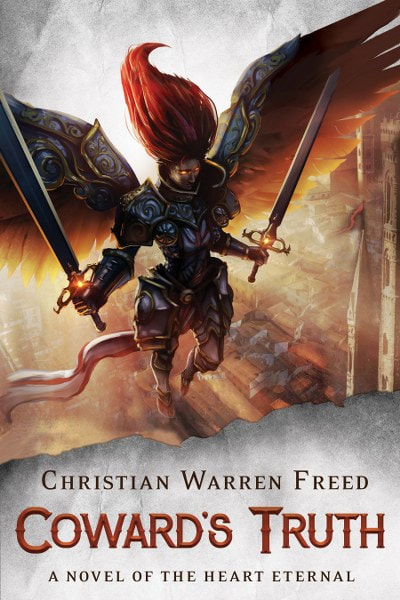 Welcome to Ghendis Ghadanisban. City of god-kings. City in turmoil.
The god-king is dead! Whispers of murder spread through the city known as the Heart Eternal. His death allows an ancient evil Razazel to return and resume its quest to dominate all life. As if that isn’t enough, warring factions threaten the jewel of the desert. The only way to prevent this is by a group of reluctant heroes to escort a young boy filled with the dying god’s essence to the ancient mountain of Rhorremere so the god-king can be reborn. It is a quest bound to claim lives, for evil never stops.
Far off in the mountains, a squad of stranded space marines sells their services in the hopes of being rescued. Their search brings them in conflict with too many enemies. Forced to join the quest, it is a decision that may prove their ultimate doom.
Fate and destiny clash as agents of good and evil set forth to stake their claim.
Welcome, friends, to the Heart Eternal.
**Releasing June 1, 2022!** 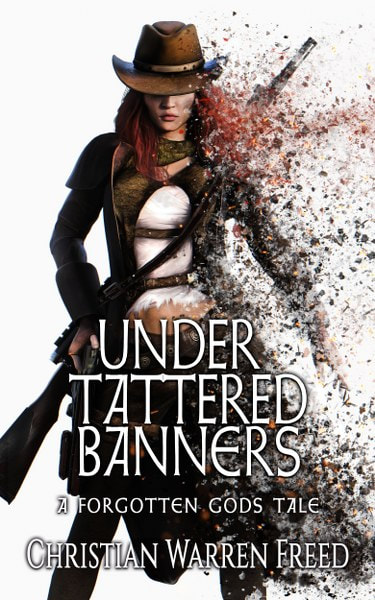 The flames of war continue spreading across the universe.
Book 5 of the Forgotten Gods Tales roars into action with Under Tattered Banners.
Amongeratix continues his crusade to eliminate his brothers and gain control of all life. Resistance stiffens but it is not enough. On Vau Prime, the disgraced General of the Prekhauten Guard leads a guerilla war against those in power. It is a losing ploy for the noose tightens with each engagement.
Half the universe away, Matthias and his allies deploy to the embattled world of Mannus Prime, where loyal armies struggle against a superior foe. If the planet falls so too will hope.
The resurrected Tolde Breed and his team are tasked with preventing Amongeratix from gaining control of his legendary battle cruiser, Behemoth. Time is against them.
Forces of good and evil clash in the continuation of the Forgotten Gods. Filled with military action, political intrigue, and otherworldly magic, Under Tattered Banners is a wild ride you won’t want to miss.
Buy your copy today and buckle up. War is coming for all. 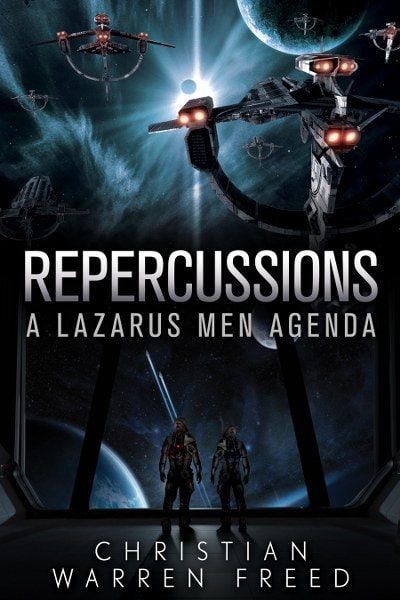 The Lazarus Men are back!
The Lazarus Men Agenda continues with Repercussions. A race across the stars to find a priceless jewel. Filled with seedy characters, reluctant heroes, and villains galore, this sci-fi noir thriller is a rollercoaster you don’t want to miss!
From award winning author Christian Warren Freed, the Lazarus Men combines the action of James Bond, Science fiction of Total Recall, and the intrigue of the Maltese Falcon.
2275, a girl walks into a bar….
And is thrust into the adventure of her life. She and a motley assortment of bounty hunters, soldiers, shapeshifters, and academics, have been chosen by a mysterious benefactor to be the first to find a long forgotten jewel. It is a treasure hunt for the ages.
When Mr. Shine, enigmatic leader of the Lazarus Men gets a whiff of it he sends his best agent, Carter Gaetis. Backstabbing, shaky alliances, and the threat of a galaxy wide war fill this fast-paced adventure across the stars.
Will any survive the hunt or will the Lazarus Men get their due? 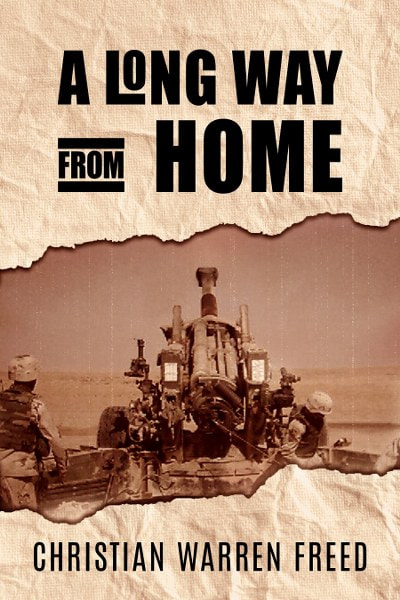 A Long Way From Home

War is Hell. Anyone who has ever put on a uniform and purposefully went to where the enemy was intent on killing him can attest to that. But instead of a singular definition of Hell that religion preaches, war is so much more. It is Hell on the families left behind. Hell on the mind and spirit. Hell on the nerves. Hell on coming home and trying to remember where you fit in. Yes, war is Hell. A Long Way From Home is the compilation of my experiences in Iraq and Afghanistan from 2002-2006. It gives first hand accounts of some of the most gruesome fighting and a behind the scenes look at what really went on from various levels.

Christian W. Freed was born in Buffalo, N.Y. more years ago than he would like to remember. After spending more than 20 years in the active duty US Army he has turned his talents to writing. Since retiring, he has gone on to publish 17 military fantasy and science fiction novels, as well as his memoirs from his time in Iraq and Afghanistan. His first published book (Hammers in the Wind) has been the #1 free book on Kindle 4 times and he holds a fancy certificate from the L Ron Hubbard Writers of the Future Contest.
Passionate about history, he combines his knowledge of the past with modern military tactics to create an engaging, quasi-realistic world for the readers. He graduated from Campbell University with a degree in history and is pursuing a Masters of Arts degree in Military History from Norwich University. He currently lives outside of Raleigh, N.C. and devotes his time to writing, his family, and their two Bernese Mountain Dogs. If you drive by you might just find him on the porch with a cigar in one hand and a pen in the other.
Website * Facebook * Twitter * Instagram * Bookbub * Amazon * Goodreads