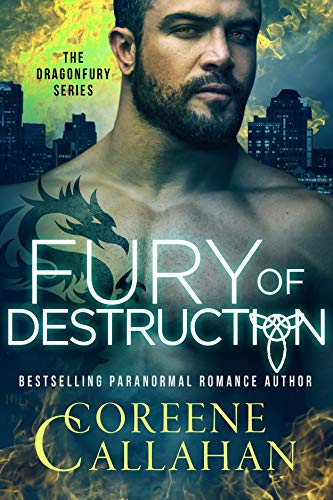 The long awaited return to the world of Dragonfury is here! For those of us who have been eagerly waiting for this book, the author doesn’t disappoint. The story picks up almost seamlessly from the previous book and gives us the story of the next Nightfury to find his mate. Along the way, we see couples from the previously books and get what I consider to be hints of action to come!

A man on the warpath…

Dragon warrior Gage has earned his brutal reputation. He strikes hard and fast, killing without mercy or remorse. But with the Nightfury lair full of females and a newly adopted son to protect, his ability to focus takes a hit. When one mistake leads to another, putting an innocent woman on enemy radar, he’s forced to decide—keep her safe by taking her with him or roll the dice and hope she goes unnoticed by the Razorback pack.

The woman in his way…

Samantha Redhook isn’t a pushover. She floats like a butterfly and stings like a bee. But with her business failing, desperation pushes her to take a contract she normally wouldn’t have, landing her in a world of trouble. Can she save the situation before things get worse or will an error judgment put an end to her dreams, and then her life?

Running from the US government isn’t smart—neither is sticking around when accused of cyber espionage.

Framed for selling state secrets, ethical hacker Ivy Macpherson is one of the FBI’s most wanted. Seeing no way out, she skips town, triggering a worldwide manhunt. On the run, she comes face-to-face with Tydrin, a man more dangerous than the agents on her trail.

Haunted by the past, all Scottish dragon-warrior Tydrin wants is peace. Hoping to atone, he returns to the scene of his crime and walks into the middle of an armed standoff. Unable to ignore a woman in trouble, he intervenes, only to realize the one he wronged is the woman destined to steal his heart.

Can she forgive him for changing the course of her life? Or will the past ruin his future with the woman of his dreams? 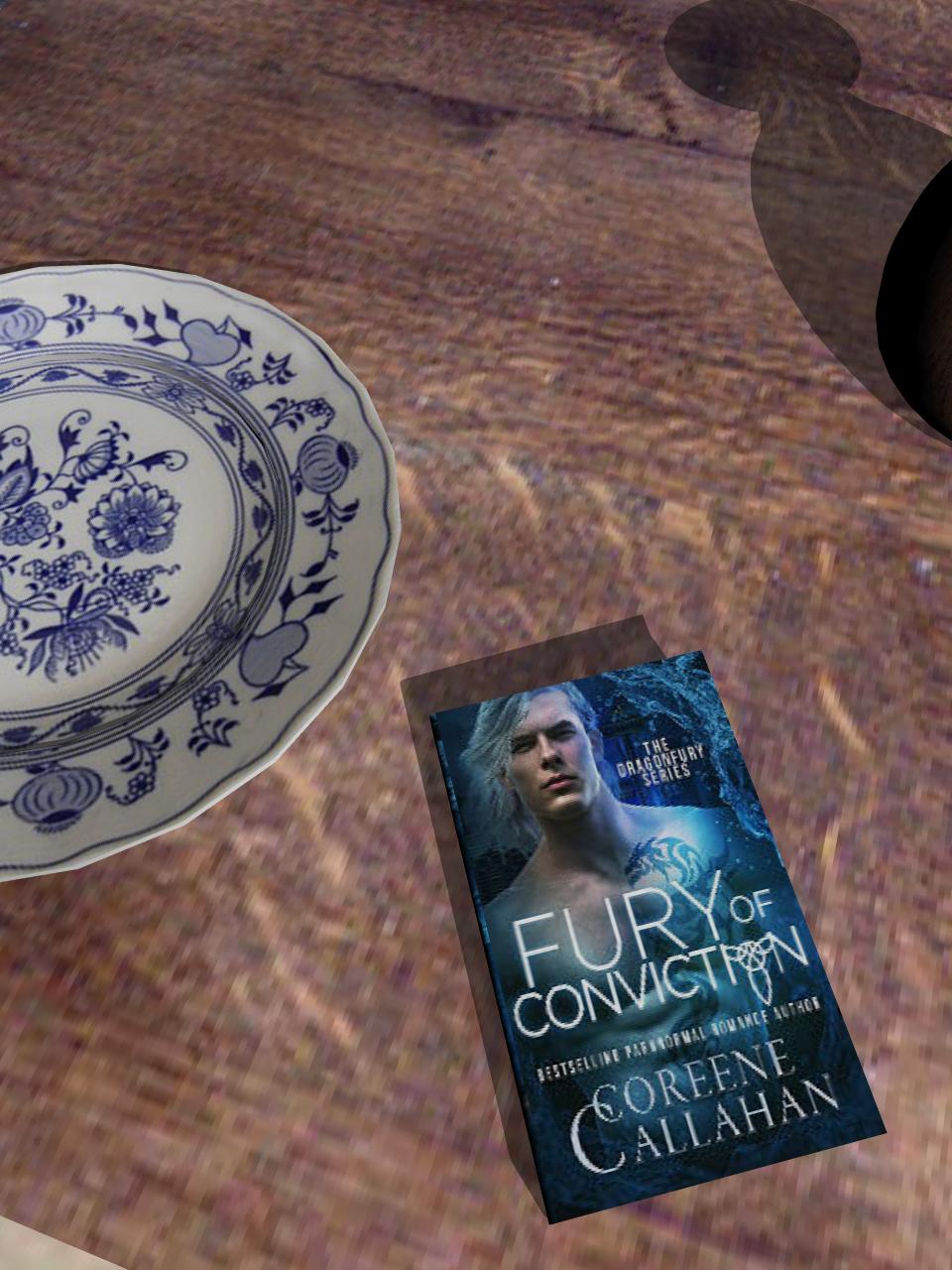 Chance brought them together in a world destined to tear them apart.

Caught between duty and honor, dragon-warrior Hamersveld is neck-deep in a dilemma. His commitment to the Razorback pack should take precedence, but when a new captive is brought into the lair, he’s forced to decide—risk everything to rescue a woman in desperate need of his help. Or stay loyal to the Razorback cause and keep his new home, along with his life.

Kidnapped by a rogue faction of Dragonkind, Natalie Bainbridge spends her days looking for ways to escape. Breaking out seems impossible until one of her captors offers her a trade—spend time with him in return for greater freedom inside his lair. With time ticking down, she enters the fray, playing a dangerous game with a man who makes no mistakes.

Will she buckle under the pressure? Or hold the line and break free for good?

Dragon warrior Forge has been sentenced to death by the Dragonkind elite. Recalling the memories of his family’s murders could drive him to the edge of insanity, but it’s the only way to remove the target on his back. Fiercely determined to protect his pack and his newborn son, Forge agrees to undergo harrowing treatments to help him remember the trauma buried deep inside his heart and mind. When nothing works, a woman of unprecedented power is brought in to help.

Young, bright, and haunted by her own demons, hypnotherapist Hope Cunningham helps patients recover from their darkest memories. But each time she liberates a wayward soul, Hope’s personal pain digs deeper—until one patient ignites an unforgettable passion.

Forge’s healing journey is not without risk. Unwittingly, he has put Hope in the middle of a dangerous war, one that could shatter their eternal bond. Will the curative power of love be enough to save them? 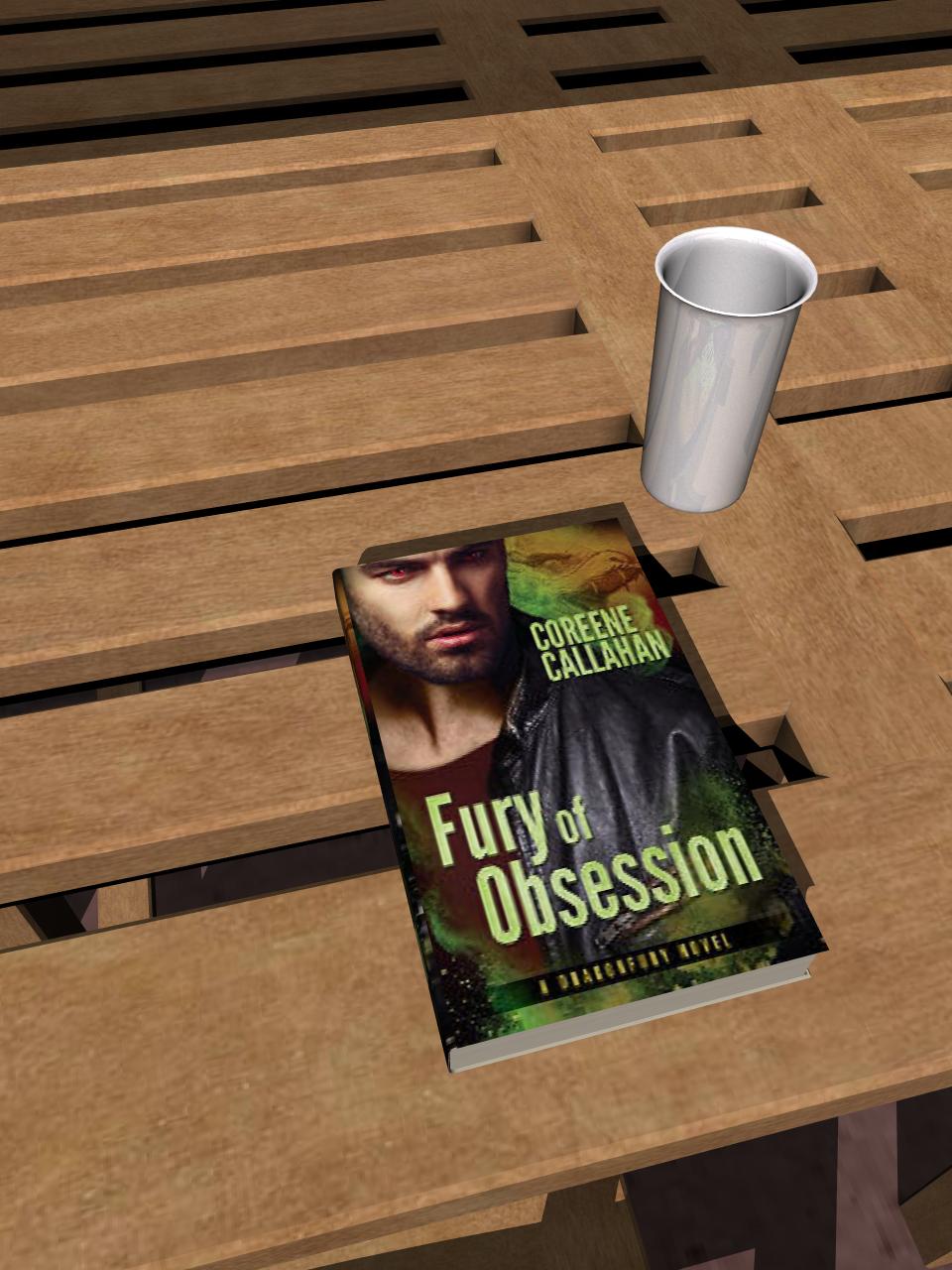 Dragon warrior Venom lives in self-imposed isolation. Cursed by his toxic touch, he is deadly to anyone who has contact with him for too long. Set apart from others and hounded by intense loneliness, he craves the lasting connection he believes he cannot possess. Until a chance encounter with a sultry mortal offers a ray of hope…

Evelyn Foxe is the woman of Venom’s every desire, but she’s too busy running from the Russian mob to think about love. As she accepts Venom’s offer to help her escape her precarious situation, she’s skeptical, afraid that he’s in league with those sent to harm her. But when a biological weapon is unleashed in her hometown, Evelyn is forced to trust Venom—or risk the dangers of going it alone.

Will they survive the firestorm that rages around them? And can they pull from the ashes a love that will defy all the odds and last through the ages?

Did you ever wonder about Ivan? The how and why of his story? This novella gives us all a more intimate glimpse into his thinking. I thoroughly loved the “peek behind the curtain.”

She’s determined to try something new…Sasha Cooper is a woman on a mission. Determined to let loose and live a little, she takes her best friend’s advice and embarks on a night of passion with a complete stranger. No regrets in the morning. No looking back either. But when the one she chooses turns out to be a Dragonkind warrior, Sasha knows she’s in trouble—and that the man she believed was a dream come true could end up being her worst nightmare.

He never intended to get involved…Ivar, leader of a rogue faction of Dragonkind, isn’t a pushover. So when a noisy neighbor jeopardizes the security of his secret lair, he decides to take care of the problem once and for all. Little does he know banging on Sasha’s door will send him on a passionate odyssey unlike any he’s ever experienced. But when the night takes a deadly turn, he’s left little choice—escape from the woman who possesses the power to kill him, or die trying

Of all of the warriors in the Nightfury pack, none is more complicated or more damaged than Wick. Emotionally scarred from a childhood of slavery and torture, Wick can barely stand the touch of another person. But all bets are off when he meets newcomer J.J. Solares. When J.J. is unjustly imprisoned, Wick agrees to help rescue and return her to the family fold. But Wick lives a life of self-imposed isolation, even among his beloved brothers in arms. Venturing into the world to seek justice for J.J. may be more than he can bear.

Meanwhile J.J. fights for her life at the hands of brutal prison guard Griggs. When she winds up in the hospital she sees no hope for things getting better. But events take a dramatic turn when she and Wick encounter each other. The connection they share is unlike anything either has felt before. J.J. believes she is hallucinating when she sees the majestic dark-haired god sweep in to save her, and Wick is shaken to his core by the attraction he feels for J.J. For the first time in his life, he finds himself wanting to get close to a woman.

After J.J.’s rescue, the two retire to Wick’s mountain home, where J.J. recovers from physical injury while attempting to help Wick recover from his emotional ones. But neither is out of harm’s way yet. And when they find themselves in the center of a Dragonkind war, they are forced to make the ultimate choice between surrendering to their fears or each other’s love.

Successful landscape designer Tania Solares prides herself on living by her own terms, relying on no man to provide for her. But her carefully controlled life takes a turn for the extraordinary when her inquiry into the disappearance of her best friend thrusts her between two warring factions of dragon shifters. Suddenly Tania’s survival depends on Mac, a newly initiated dragon warrior who will break every rule to keep her safe.

Now that Tania knows the truth about Dragonkind, returning to her old life is too grave a risk. Ivar, leader of the Razorbacks, plots to decimate the human race, and Tania is just the tool he needs. Despite the danger, Mac cannot deny her a choice: Trade the independence she’s fought so hard to achieve for safety in a magical world, or turn her back on the man she’s grown to love in order to reclaim a freedom that might not last? It is an impossible choice. And yet a sacrifice must be made 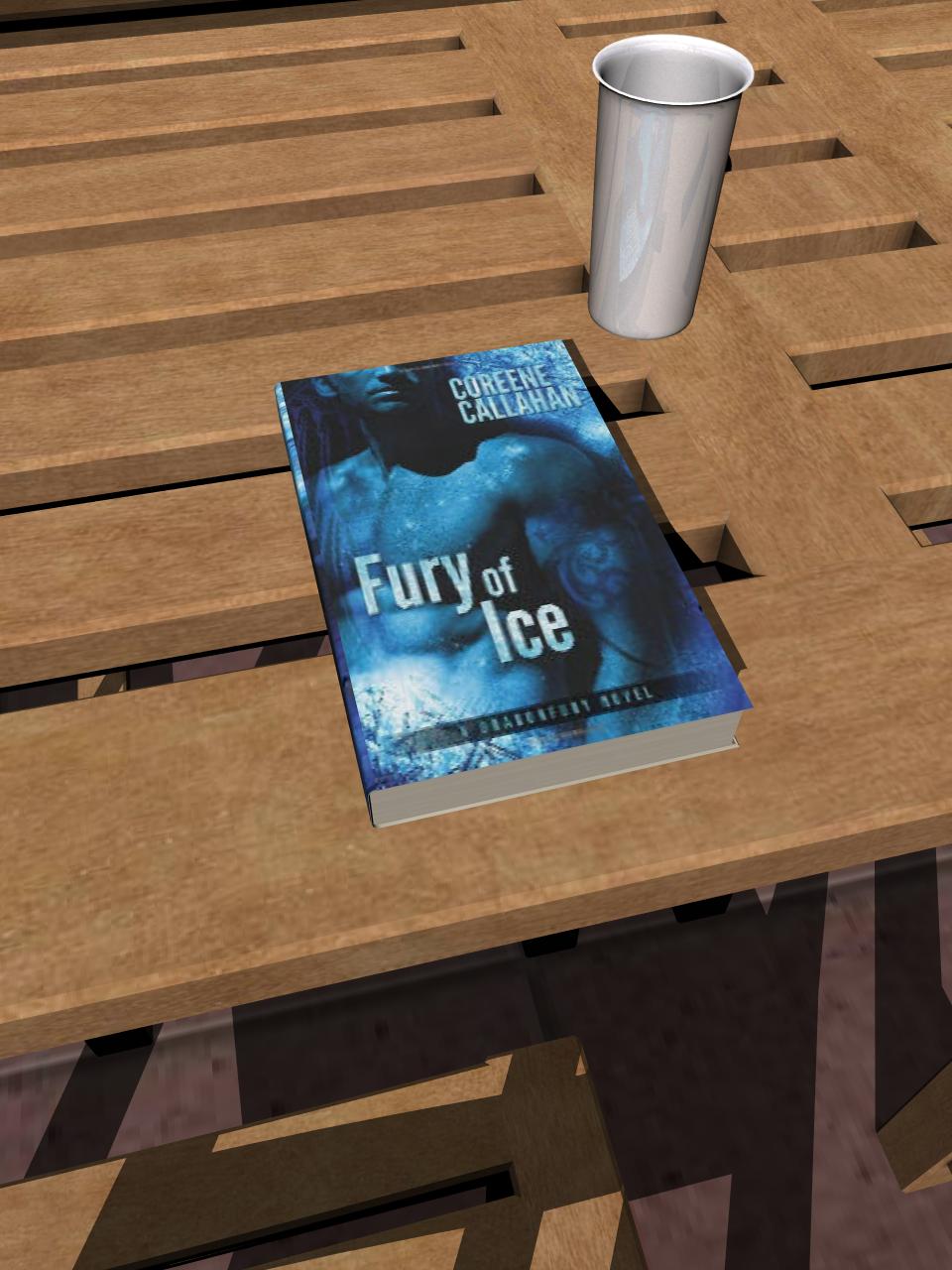 Homicide detective Angela Keen thrives on the city’s rough streets. But when she becomes the prize of all prizes in the dragon-shifter world due to her “high-energy” status, she gets more than she bargained for. Kidnapped by Lothair of the Razorback clan, Angela barely survives captivity before managing to escape. Hurt and alone with nowhere to hide, she faces certain death when Lothair uses the trace energy she leaves in her wake to hunt her down. But before he can reach her, a mystery dragon shifter intervenes and saves Angela’s life.

Now a guest of the Nightfury clan, Angela regains her strength as her rescuer, Rikar, the last living frost dragon, gradually breaks down her mistrust. Surrendering to her desire for Rikar, but still uncertain of her feelings, Angela goes against his wishes and agrees to be used as bait to lure Lothair into the open. As the battle commences, the true struggle comes from within: Will Angela return home to the life she loves, or forsake it all to be with Rikar?

A clandestine race of half-dragon, half-humans known as dragon shifters lives among us. Bastian, leader of the Nightfury dragon clan, is sworn to protect humankind at all costs. For him, honor and duty always come first. When the clan dictates he take a human mate to sire a son, he falters, aware that for a human to birth a dragon shifter she must die. Myst, the woman given into his care, is the most extraordinary he’s ever met, and though he can’t bear the thought of harming her he is bound by duty.

Myst loves her life in the human world, but Bastian has captured her heart in an instant of electric connection. But Bastian and his warriors are in the middle of a deadly battle with the Razorback dragon shifters, intent on killing every Nightfury clan member—and the humans they protect—the fate of their world and ours hangs in the balance.